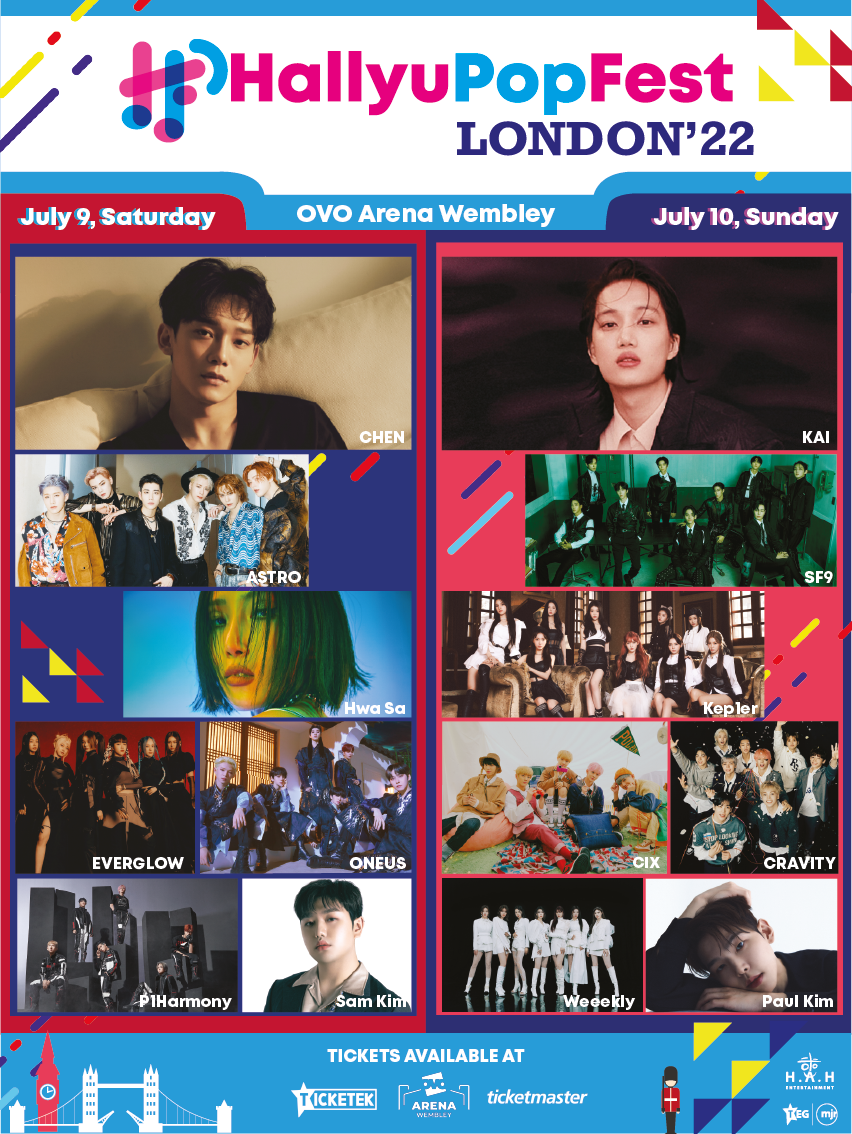 The hugely successful K-pop music festival, HallyuPopFest, will be making its first impression on a London audience this July, following its runaway success as one of South East Asia’s largest Korean music festivals. An expansive and diverse highlight reel of Korean music and lifestyle will be on display at the animated K-pop extravaganza on 9-10 July at OVO Arena Wembley.

Announced today, inimitable K-pop superstars CHEN and KAI will serve as the Saturday and Sunday headliners. With 1.5 million and 1.3 million unique Spotify listeners respectively, their impact on the K-pop scene both as soloists and as members of revered 9-piece boy idol group EXO is unparalleled. Bringing their expansive global reach and charming stage presence to the OVO Arena Wembley, both headliners promise an unforgettable performance. They are joined by P1Harmony, Sam Kim, Kep1er, CIX, Weeekly and Paul Kim to round out a dazzling spectrum of K-pop over the festival’s two days. With the first wave of artists already announced, the second wave will be joining ASTRO, EVERGLOW, Hwa Sa, SF9, CRAVITY and ONEUS already on the line-up.

With both headliners CHEN and KAI serving as members of one of Korea’s hottest boy idol groups EXO, their solo presence brings an electrifying energy to the build-up of the festival. Notably, this is CHEN’s first-ever London performance. Bolstered by CIX, Paul Kim, the hip-hop veering P1Harmony, viral K-drama star Sam Kim and the finesse of dynamic girl groups Kep1er and Weeekly, HallyuPopFest promises to showcase a broad spectrum of South Korea’s top talent, both new and well-established.

The days themselves promise attendees an all-encompassing journey throughout Korean culture, promising showcase performances from fledgling K-pop and indie artists, a Red Carpet event, artist engagement opportunities and finally, the breathtaking evening programme that highlights some of K-pop’s most talked-about stars.

There is a 20% discount available on tickets for students and NHS staff attending the festival. To access the discount, tickets can be purchased from the Ticketek link, with options available to select the discounted ticket from each site.

Also announced today is a 2 Day Weekend Pass, allowing fans to catch both CHEN and KAI alongside their impressive contemporaries on the line-up. With each artist spearheading the Korean Wave Movement with their unique performance and style, the 2 Day Weekend Pass is a guaranteed way to enjoy HallyuPopFest at its best.

As one of South East Asia’s first and largest K-pop festivals, #HallyuPopFest was the most tweeted hashtag in Singapore in 2018, and together with the 2019 festival, saw a cumulative 40,000 attendees spanning Asia. Previously, HallyuPopFests have seen house name K-pop artists such as NCT 127, Monsta X, Super Junior, Wanna One and Taeyeon feature on their line-up. The term Hallyu is used to describe the new ‘Korean Wave Movement’, synonymous with a huge influx of Korean cinema, music and culture that has transfixed global audiences. The festival promises to be a truly unmissable event, with troves of entertainment for K-pop fans.

Every ticket gives festival-goers access to two concert events per day – the Showcase and the Evening Concert where headliners will perform individual sets. The shows have previously been described as a concert within a concert. Each artist has promised to deliver their greatest hits alongside newer material. There will also be a Hi-Wave Meet and Greet for fans and artists to meet within close proximity, but adhering strictly to Covid guidelines.

The first HallyuPopFest in the UK is going to be an unforgettable weekend. With some of the biggest names in New Wave Korean music performing their greatest hits, it will be a chance for UK fans to fully immerse themselves in Korean music and embrace the Korean Wave lifestyle.

A select group of excellent products from small and medium-sized Korean enterprises will be featured. These stalls have been chosen because of their innovation and quality, with each looking to target the global market in upcoming years. HallyuTown welcomes attendees to discover K-themed products through its unique, immersive curation.

More details to be announced via HallyuPopFest London 2022 socials and website: