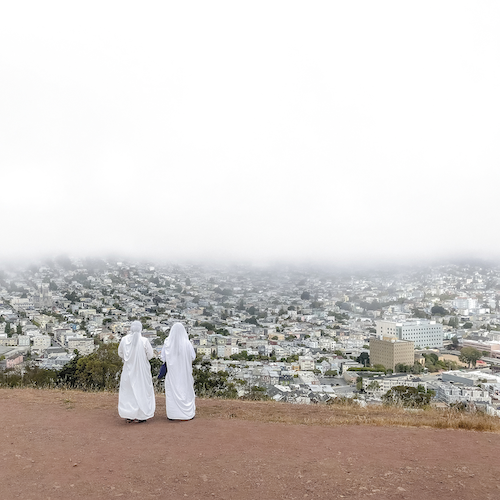 Death Cab for Cutie return today with “Roman Candles,” the first track off their highly-anticipated tenth studio album Asphalt Meadows. The new track from the indie rock veterans – now in their 25th year as a band – is available at all DSPs and streaming services via Atlantic Records (buy/stream here). The song arrives with an official lyric video designed by Juliet Bryant (Justin Vernon, Japanese Breakfast, Laura Jane Grace) – watch here.

As with the forthcoming album in its entirety, “Roman Candles” was produced by GRAMMY® Award-winner John Congleton (St. Vincent, Sharon Van Etten, Wallows).

Of the inspiration for the song, the band shares: “‘Roman Candles’ is about the crippling, existential dread that goes hand in hand with living in a nervous city on a dying planet. And that the only way to be in the moment is to let it all go.”

The track was born from co-founder, lead vocalist, and guitarist Benjamin Gibbard’s determination to create something succinct, loud, and strikingly direct. He shares: “The lyrics were cobbled from a couple of different songs dealing with my general sense of anxiety; the feeling that the fabric that weaves a functioning society together was crumbling during the pandemic.“

Death Cab for Cutie’s ninth studio album Thank You for Today was released in 2018. That album saw the band entering its second decade by both expanding and refining its signature sound, with highlights including lead single “Gold Rush”.

The band continued to affirm their lasting artistic legacy with a wide range of creative activity in the years that followed, including diverse collaborations such as Chance the Rapper’s 2019 album track, “Do You Remember (ft. Death Cab for Cutie),” and Tycho & Gibbard’s acclaimed 2021 single, “Only Love.”

Gibbard presented a series of “Live From Home” livestreams throughout the duration of the COVID-19 pandemic, helping raise over $250K in donations and supplies for various Seattle-area relief organizations. The livestreams – which showcased songs from Death Cab for Cutie, The Postal Service and his solo material, along with covers and other surprises – drew over 4.5 million total views.

December 2020 saw Death Cab for Cutie release The Georgia EP, initially offered as a 24-hour Bandcamp exclusive in advance of the crucial Georgia runoff elections that ultimately turned the state blue and secured Democratic control of the US Senate. The five-song project – which features covers of iconic artists from the great state of Georgia – raised over $100K for Fair Fight Action, the national voting rights organization founded by Stacy Abrams to promote fair elections around the country through voter education, election reform, and combating voter suppression. “Fair Fight is grateful for the support of Death Cab for Cutie in our fight for free and fair elections in Georgia and nationwide,” Abrams said later. “The Georgia EP helps tell the story of Georgia just as their contributions have helped us write the next chapter.“

In February of this year, Gibbard conceived, curated, and executive produced Ocean Child: Songs of Yoko Ono, an acclaimed tribute to the groundbreaking singer, songwriter, multimedia artist, and activist released in celebration of her 89th birthday. The collection – which includes Death Cab for Cutie’s own cover of “Waiting For The Sunrise” – also features contributions from a stunning range of diverse artists, including David Byrne, Japanese Breakfast, The Flaming Lips, and Sharon Van Etten. Ocean Child earned worldwide critical acclaim spanning The New York Times, Rolling Stone, NPR, The Guardian and more.

Formed in Bellingham, WA in 1997, Death Cab for Cutie almost immediately entered the ranks of the era’s definitive bands, fueled in large part by the remarkable power of co-founder, vocalist, guitarist, and lead songwriter Benjamin Gibbard’s complex, often bittersweet songcraft. The band made their worldwide popular breakthrough with 2003’s RIAA gold certified Transatlanticism, later named by NPR as one of “The Decade’s 50 Most Important Recordings.” Plans, their 2005 Atlantic Records debut release, saw Death Cab for Cutie ascending to even greater heights, earning RIAA platinum certification and a GRAMMY® Award nomination for “Best Alternative Album” while spawning the chart-topping singles, “Soul Meets Body” and “I Will Follow You into the Dark,” the latter of which was honored with a GRAMMY® nod for “Best Pop Performance By Duo Or Group With Vocals.” Their following albums – including Narrow Stairs (2008), The Open Door (2009), Codes and Keys (2011), and Kintsugi (2015) – all received various GRAMMY® Award nominations, bringing their total career nominations to eight overall.