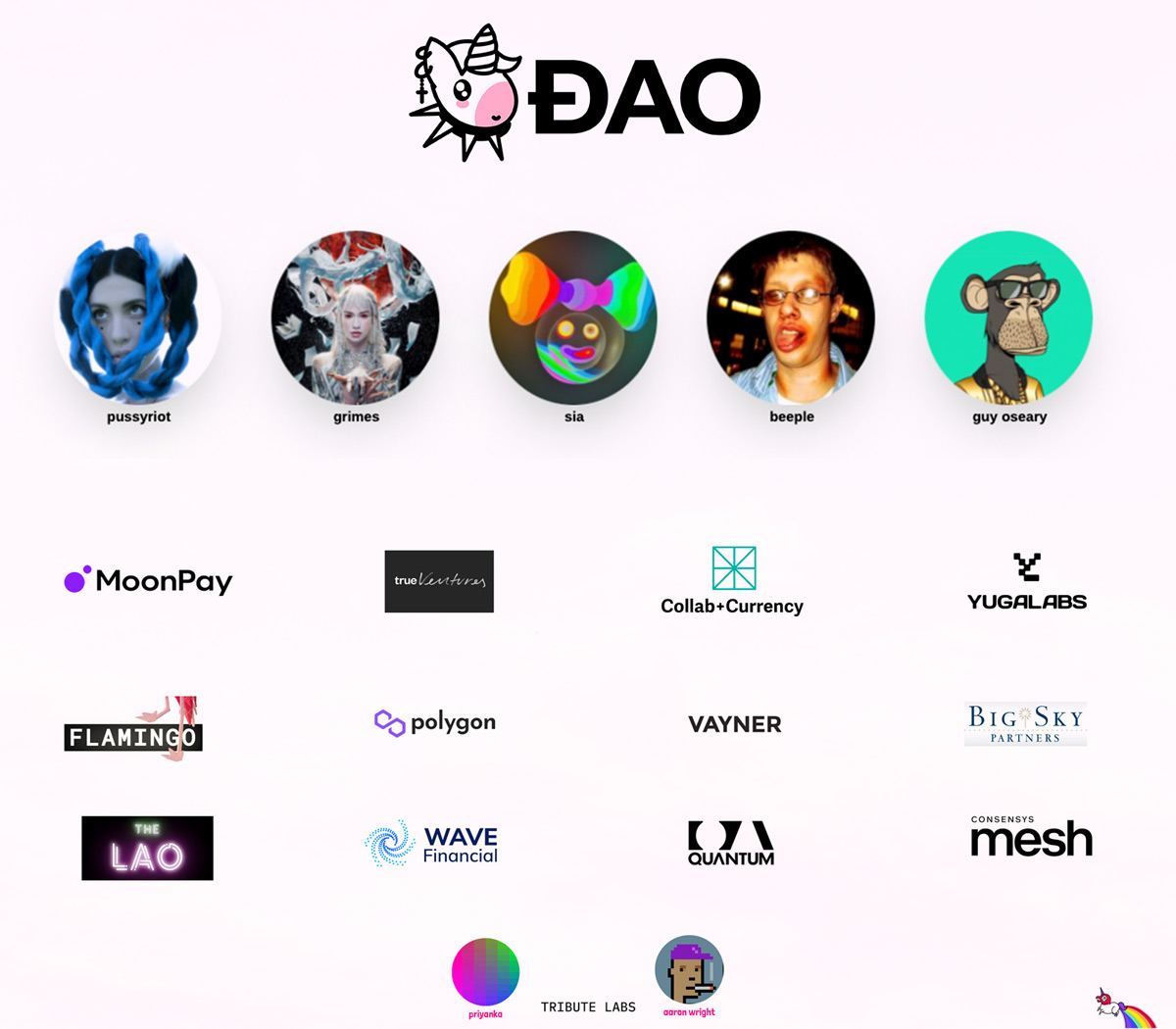 Earlier this week, the influential artist, and musician Grimes announced that she joined the board of the collective and offered an art piece to the UnicornDAO collection. ​​”Donating my video 4 ‘New Gods’ to @unicorndao_xxx to help their mission to fund/ develop female and non-binary lead art and projects. I’m also joining their board. Made this video with Sevi, Mac Boucher and Neil Hansen.”

UnicornDAO announces opening applications to the general public and that their next event is on Tuesday June 21st at NFT.NYC in New York.

UnicornRiot is the next step after UnicornDAO: unlike the DAO, it’s going to be free to join and its goal is to politically organize and fundraise for activist causes – with the focus on reproductive justice during this summer of rage in the US. UnicornRiot will use a successful model of UkraineDAO that was co-founded by Nadya Tolokonnikova and raised $7M+ in 2 days to fight the war in Ukraine.

UnicornDAO is a feminist movement that consists of Web3 native people who are using Web3-based tools to create much-needed equality in the Web3 space. The art investment fund redistributes wealth and visibility in order to create equality for women-identified and LGBTQ+ people in the world in general, and in the digital art space in specific. Currently, these demographics only account for as little as 5% of the digital art sales.

UnicornDAO’s launch in March 2022 marked the 10-year anniversary of Nadya’s arrest in Moscow for her anti-Putin protest Pussy Riot’s Punk Prayer which led to her being imprisoned for 2 years. Since December 2021 Tolokonnikova is named a “Foreign Agent” by the Russian government – aka Putin.

Each of the members contributes with both capital and time. From its inception, UnicornDAO aims to implement a sponsorship program, aided by a partnership with crypto payments infrastructure provider MoonPay. This program will ensure that leading women-identifying and LGBTQ+ creators and community builders are able to participate as members of UnicornDAO without being hindered by any financial barriers to entry.

“NFTs are a gateway to a new economy and it’s important for women and LGBTQ+ to be represented early in this new industry,” said Nicole Muniz, CEO at Yuga Labs. “We are happy to support UnicornDAO’s mission to fund businesses and purchase NFTs created by women and LGBTQ+ people to help onboard new creators to Web3. To put our money where our mouth is immediately, Yuga Labs will be donating it’s seat in the UnicornDAO to a women or LGBTQ+ leader in the space who may not be able to afford the cost of it.”

Grimes says: ​​”Donating my video 4 ‘New Gods’ to @unicorndao_xxx to help their mission to fund/ develop female and non-binary lead art and projects. I’m also joining their board. Made this video with Sevi , Mac Boucher and Neil Hansen.”

Tolokonnikova declares: “The goal of UnicornDAO is to bring more tools, capital and power to women-identifying and LGBTQ+ people. We still have the same ethos as Pussy Riot did over 10 years ago; bringing equality, justice, and joy to communities that have been historically underrepresented.”
“Art made by women sells for 50% less than works by men. If you’re a female or LGBTQ+ identifying person, you make more compromises than your male-identified counterparts. You are scrutinized, questioned, and often your professionalism is disputed. Capital is still vastly concentrated in the hands of men–they still rule the world, and it’s not cute. UnicornDAO is here to redistribute wealth and allow women and LGBTQ+ people to empower themselves.”

John Caldwell, UnicornDAO co-founder & Principal of Wave Financial’s NFT Fund: “Buying female+ art is not an act of charity, it is a strategic investment into what we believe is an undervalued asset class. We are also very excited to work with female and nonbinary builders and entrepreneurs on the venture side.”

“Working with Nadya on Ukraine DAO and now Unicorn DAO has been inspirational as we can start to enact meaningful social change with web 3 tools. We also always try to make our hero Vitalik proud when and echo his sentiment from his comments in Time: “One silver lining of the [Ukraine] situation … is that is has reminded a lot of people in the crypto space that ultimately the goal of crypto is not to play games with million-dollar pictures of monkeys, it’s to do things that accomplish meaningful effects in the real world.” Vitalik Buterin Link

Rebecca Lamis, UnicornDAO’s co-founder, states: “We believe that the present male-dominated NFT landscape can be radically changed with coordinated efforts among leaders in the space. “Web3 and DAOs have launched an entirely new economy that can redistribute wealth and opportunities to the 99%, yet there are still immense barriers to entry standing in the way of the opportunities Web3 offers. That is why it is a priority for myself and UnicornDAO to ensure everything we do in this space is accessible and educational. It is time to redistribute the wealth, resources and opportunities to all in this space, while simultaneously onboarding historically oppressed communities”.

Yam, artist & co-founder of World of Women: “World of Women was created to remedy the lack of diversity and representation in the NFT space. While we focused on women, we always wanted to do more for the LGBTQ+ community. This is why when we heard about UnicornDAO, it really resonated with our values, and it felt obvious for us to join forces. We couldn’t have wished for a better community to pursue our mission, and together, make a difference.”

Valma Tikkakoski, Director of Marketing at MoonPay, says of the partnership: ​​”For all the excitement and activity in crypto we have to remember that this industry is still in its infancy. We’re at a crossroads right now where we have the opportunity, as an industry and as a community, to show to women and LGBTQ+ artists that the door isn’t closed to them. That crypto is a revolution for everyone, regardless of gender, and in order to take this extraordinary technology mainstream, we need all the bright, young talent we can muster”.

Conceptual artist and activist Nadya Tolokonnikova is the founding member of Pussy Riot, a global feminist protest art movement. Today, hundreds of people identify as a part of the Pussy Riot community.

She was sentenced in 2012 to 2 years’ imprisonment following an anti-Putin performance. Went through a hunger strike protesting savage prison conditions and ended up being sent far away to a Siberian penal colony, where she managed to maintain her artistic activity and with her prison punk band she made a tour around Siberian labor camps. Published a book “Read and riot: Pussy Riot’s guide to activism”.

Co-founder of independent news service and media outlet, Mediazona. Has spoken before the US Congress, British Parliament, European Parliament, appeared as herself on season 3 of House of Cards.

Pussy Riot’s Punk-prayer was named by The Guardian among the best art pieces of the 21st century (“feminist, explicitly anti-Putin, protesting the banning of gay pride and the Orthodox church’s support of the president”), collaborated with Bansky on his Dismaland exhibition, endorsed by Marina Abramovic and Ai Weiwei, created an immersive experience in Saatchi gallery in London.

Pussy Riot joined the NFT community in early 2021, is a founder of UnicornDAO, and UkraineDAO, a PleasrDAO member, and a supporter of a stronger female representation in the NFT space.

Earlier PussyRiot NFT projects and crypto fundraising projects Nadya was active in are:
Panic Attack
Virgin Mary, Please Become a Feminist
ACAB
EDEN
Ross Ulbricht Genesis Collection – raised over $6.3M to fund the fight to free Silk Road’s Ross from an incredible double life + 40 years (no parole) sentence.
UkraineDAO – raised over $7M for Ukraine in a few days by selling 1 NFT of the Ukrainian flag. (a genius concept – literally “right-clicked” a jpeg from the net and sold it via PartyBid)

MoonPay is a financial technology company that builds payments infrastructure for crypto. Their on-and-off-ramp suite of products provides a seamless experience for converting between fiat currencies and cryptocurrencies using all major payment methods including debit and credit card, local bank transfers, Apple Pay, Google Pay, and Samsung Pay. MoonPay is active in more than 160 countries and is trusted by 250+ leading wallets, websites, and applications to accept payments and defeat fraud. For more information visit https://www.moonpay.com/