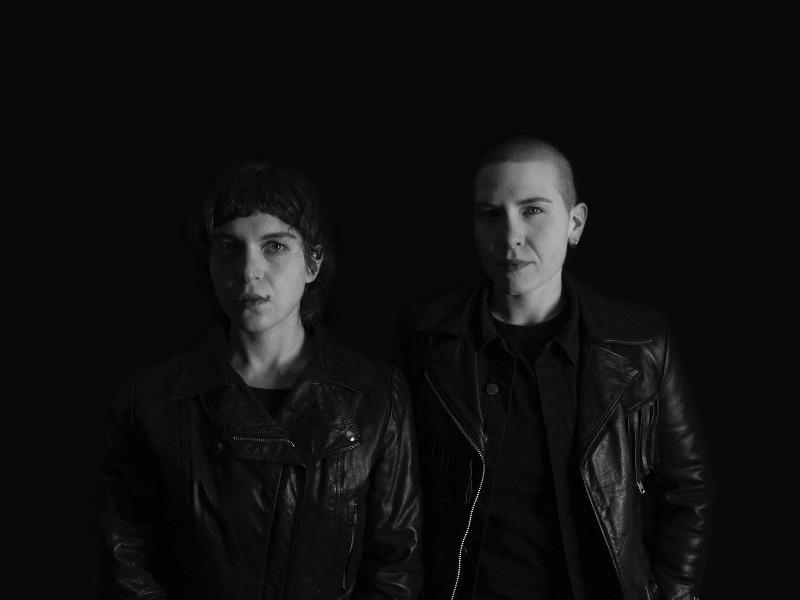 Bonnie Trash is the drone-rock project of Canadian-Italian twin sisters Emmalia and Sarafina Bortolon-Vettor. Today they share new single “Teeth“ – a first glimpse at their debut album, which is due to be released later this year by Hand Drawn Dracula.

“Teeth” sees Bonnie Trash at their poppiest, recontextualizing a “Be My Baby” beat (a nod to Ronnie Spector up above) before a wash of swoony, microtonal drones, the words telling of a love story that might be toxic.

The band share the track with a self-directed video, commenting: “We created a short film to help narrate stories our Nonna Maria told us about being haunted and followed by a curse in her hometown of San Zenone degli Ezzelini in Treviso, Italy. That short eventually became the concept of our album, which is woven into our first music video, “Teeth.” Shot at the Apollo Cinema in Kitchener, Ontario, “Teeth” bridges generations of being haunted – we see ourselves watching our work without understanding that we too have conjured the curse. A malocchio follows.”

The music of Bonnie Trash connects the threads between metal, post-punk, shoegaze and gothic rock, with Emmalia’s astounding guitar work recalling the likes of Black Sabbath, Godspeed! You Black Emperor, Joy Division and My Bloody Valentine. Singer/drummer/lyricist Sarafina’s voice leaps out of the mix with a commanding presence, summoning references to PJ Harvey or Siouxsie & the Banshees.

That mix of musical influences alone would set Bonnie Trash apart, but the duo’s unique approach to their lyrical content really puts them in a school of their own. Inspired by communication theory, social commentary, horror, and ancestral folklore, the sisters approach their songwriting as a conceptual research project into their own family heritage. As second-generation Italian-Canadians, the Bortolon-Vettors became fascinated by the stories told by their Nonna and the connections between Treviso in Northern Italy and their hometown of Guelph, Ontario.

The twins began playing music together at age 11, forming an all-female punk band in high school and a more eclectic indie group during their college years. But what became Bonnie Trash began to coalesce around 2013, when they moved back home to Guelph after spending time in the larger cities of Toronto and Montreal. A progressive college town with a vibrant DIY music scene, Guelph is also home to a tight-knit Italian-Canadian community and the name “Guelph” also has an Italian origin.

Spending more time with their Nonna Maria, they began digging into the ghost stories they heard as children, becoming more fascinated with the folklore, the superstitions, and the unique Veneto dialect she spoke — a dialect the sisters recognized was also dying out. Suddenly, the act of songwriting had also become an act of cultural preservation. And some of these stories were hair-raisingly scary. Discovering this heavier subject matter coincided with a shared desire to play heavier music.

More music and live dates will follow in due course.