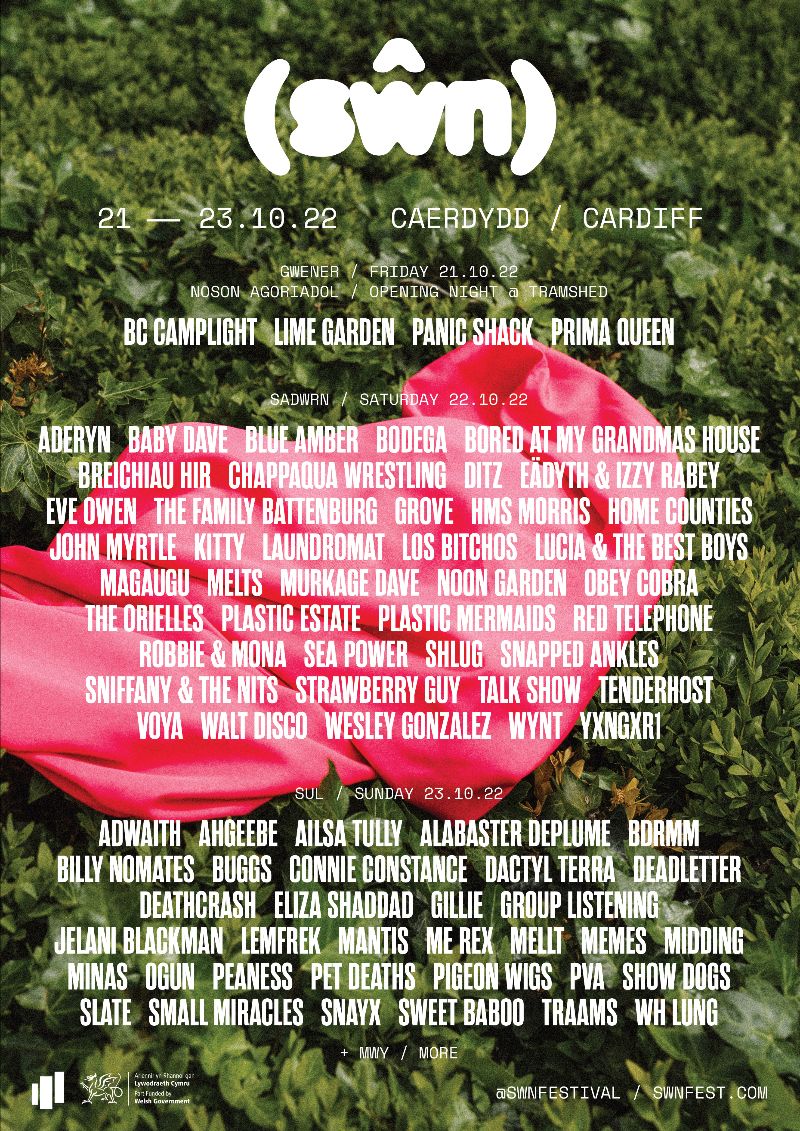 Fast becoming an unmissable highlight of the UK new music calendar, Cardiff’s Sŵn Festival today announces the first batch of names for its 2022 edition, taking place across the Welsh capital from October 21st to 23rd. Returning for the first time at full-scale since 2019, the tastemaker festival presents a perfect mix of established and upcoming artists for a celebration of the diverse, exciting nature of British music and beyond. Following Cardiff also hosting this year’s BBC 6Music Festival, it serves as a further cap on what’s been a remarkable year for Welsh music.

Championed by everyone from Lou Reed and David Bowie to the National Maritime Museum, Brighton’s Sea Power head to Cardiff hot on the heels of their acclaimed new album, Everything Was Forever, which charted at #4 on the Official UK Album Chart back in February. A remarkable achievement for a release on a small fan-funded independent record label and a further reiteration of their status as a beloved indie-rock institution.

One of the most infectious, effervescent and active acts currently on the live circuit, London-based Cumbia pioneers Los Bitchos are in town in support of their Alex Kapranos-produced debut album, Let the Festivities Begin! That’s no misnomer: their live show – honed across tours with the likes of Ty Segall, Mac DeMarco and Dry Cleaning – is the biggest party imaginable.

Bringing a heady fusion of punk-infused dancehall, jungle, bass and pop, Bristol-based producer, vocalist and DJ Grove is sure to be a highlight of the weekend. Expect a sensuous, rave-centric throwdown fuelled by political angst and queer euphoria.

Keeping it Bristol, another set not to be missed comes from Billy Nomates. Signed to Geoff Barrow’s Invada imprint and with an impressive array of admirers including Iggy Pop, Sleaford Mods and Steve Albini, the project of singer-songwriter Tor Maries has been one of the most talked-about new acts in the UK in recent years off the back of an acclaimed s/t debut album and 2021’s Emergency Telephone EP. Keep your eyes peeled for a new album in the not too distant future.

Bringing a hit of NYC cool to proceedings are Brooklyn post-punk cru BODEGA who released their acclaimed second album, Broken Equipment, earlier this year to praise from the likes of NME, DIY and Loud and Quiet and consistent championing at BBC 6Music. Catch them in Cardiff for a hearty serving of tongue-in-cheek humour, irresistible grooves and existential quandaries on everything from algorithmic targeting to media gentrification.

Pulling from a diverse palette of sounds that range from dub and reggae to jazz and indie, be sure to keep an eye out for Watford singer-songwriter – and graduate of the prestigious Trinity Laban Conservatoire of Music and Drama – Connie Constance over the weekend.

One of the most ubiquitous forces in contemporary British music, Murkage Dave heads to Wales with his second studio album in tow, The City Needs a Hero, a triumphant fusion of soul, house and indie that offers a candid and forlorn observance of the conflicted times we live in.

The festival’s opening night takes place on Friday, Oct 21st at the 1000-capacity Tramshed and promises a rapturous start to proceedings. The inimitable BC Camplight return to Cardiff for their biggest headline show to date in the Welsh capital, armed with an eclectic array of singer-songwriter classicisms, gnarly synth-pop and ’50s rock’n’roll. Joining them are hometown heroes Panic Shack who continue their breakout 2022 with razor-sharp indie-punk anthems galore, fast-rising Brighton quartet Lime Garden who are on hand to display why DIY have labelled them “the spiritual successors to Britpop’s finest females,” and transatlantic alt-rock duo Prima Queen fresh from opening for The Big Moon on a sold-out UK tour.

“I cannot stress how excited myself and the team at Clwb are that we are able to bring Sŵn Festival back in 2022 in its fullest form. We are incredibly pleased to share the first wave of the 2022 edition with you. Booking the line-up is always such a pleasure and we are still somehow amazed by how many new artists there are each year. It is a total struggle to get them all on the bill. How many bands is too many bands?.

“The festival has always and will always showcase who we believe are the future big festival headliners both international and Welsh artists. This year, Cardiff centre will host over 120 artists across 12 venues. We have artists returning to the city: BC Camplight, The Orielles, Bodega, Billy Nomates, Snapped Ankles, Sea Power. We have artists making their Cardiff debut: Los Bitchos, Prima Queen, Lucia & The Best Boys, WH Lung, bdrmm and many many others. Expect new spaces, friendly faces and a whole lotta pink!”

Keep your eyes peeled for more from Sŵn Festival as October approaches, but for now head to swnfest.com for more information and ticket pricing options (early bird tickets are now sold out), and see below for the full rundown of act announced today.