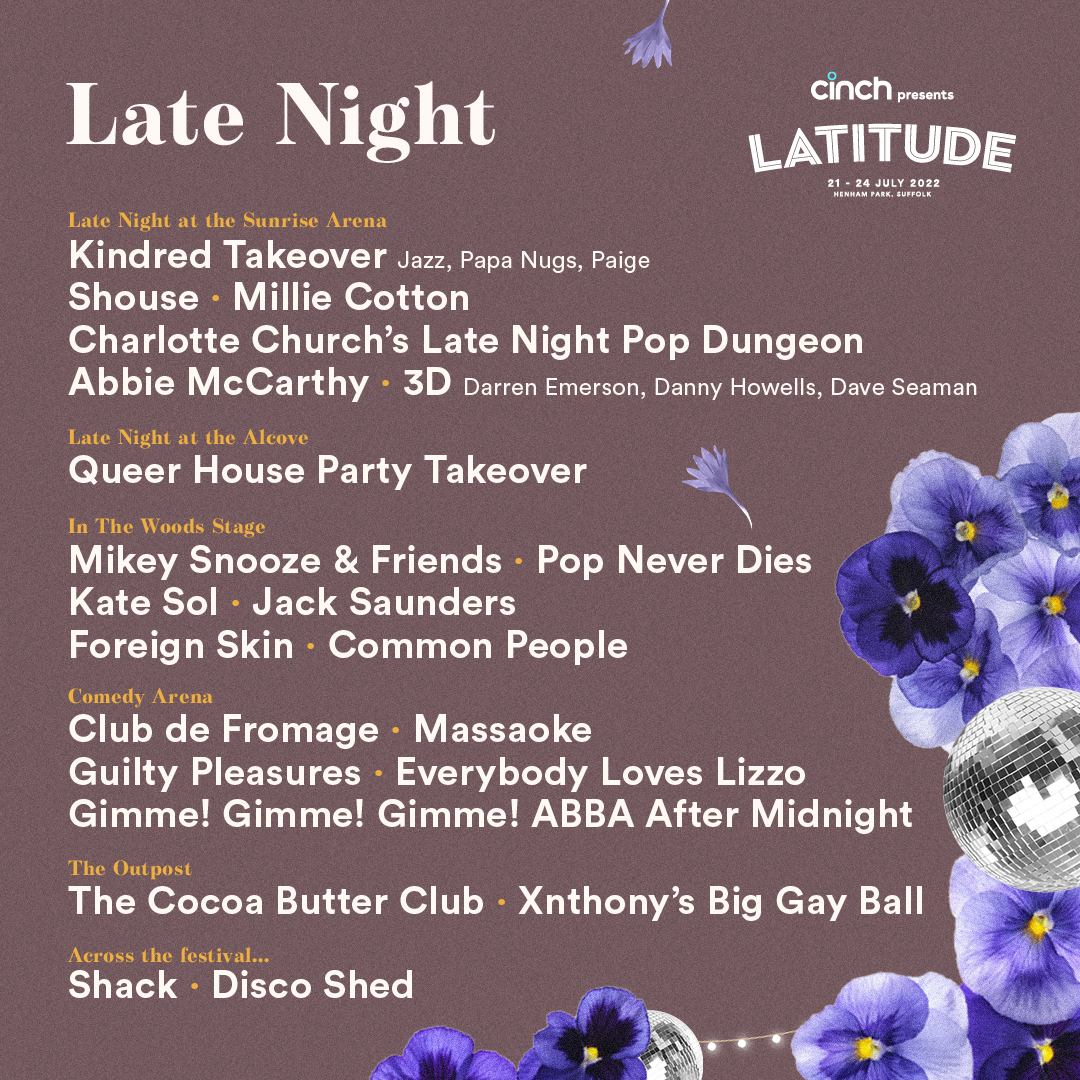 After dark, Latitude comes alive with back to back late night DJs, cutting edge dance-talent and some of the UK’s leading club nights, with an eclectic range of talent newly announced today. From 90s classics, 80s legends, 00s throwbacks to your favourite viral hits and the biggest bangers of today,  an amazing weekend of late night revelry awaits. Weekend and day tickets are on sale here

With top dance legends Groove Armada and Sevdaliza already announced, cinch presents Latitude is upping its electronic game yet again with some amazing late-night talent.  Melbourne-based duo Shouse headline the Sunrise Arena after dark on Friday following a  phenomenal year! Their dance anthem ‘Love Tonight‘, continues global domination after collecting over 750 million streams, reaching the top 10 of the charts throughout Europe, and the # 1 In the USA Billboard Dance Radio. The broody dance track with jazz sax, tones of gospel, and a dark, synthwave clinging bassline has connected with millions and is hailed by many as the post-lockdown anthem, it’s a  is a song of connectedness and togetherness, uniting the world in solidarity following  “a time of isolation,” the pair explain, “and now in ecstatic love during a time of release”.  Earlier this year, Shouse released new club banger  ‘Won’t Forget You‘, a track that Ed and Jack said, “is a song about friendship and love.”  Their live-house sets incorporate a network of analog synthesisers, sequencers and drum machines  Expect hands-in-the air house-music with huge, choral, anthemic moments.

Charlotte Church’s Late Night Pop Dungeon takes over late night Sunrise Arena proceedings on Saturday night.  Mistress Charlotte Church will perform a genre-hopping covers set performed live by an expansive (and impressive) backing band. Past Pop Dungeons have seen the likes of David Bowie, Britney Spears, Beyonce, Prince, En Vogue, Rage Against The Machine, Missy Elliott and Black Sabbath spliced together into an irresistible evening of pop majesty; a night that promises to leave audiences united, euphoric, and thoroughly danced out!  In her own words ‘It’s full of love; like a massive party with a really warm hug at the end’.

3D will bring cinch presents Latitude to a dramatic conclusion on Sunday night into Monday morning.  3D is a collective of iconic producers/DJs Danny Howells, Darren Emerson and Dave Seaman delivering the best in deep house, tech house, techno and everything in between in one massive B2B set. 3D is a musical creative project born out of a desire to challenge the modern narrative of a dance music show, offering an insight into the world of these three revered DJs and producers as they elevate their craft to another level. Howells, Emerson and Seaman stand at the vanguard of electronic music. 3D is the culmination of all their years combined into one revolutionary sound.

In the Woods also boasts a stunning line-up for those who like to party late. Latitude favourite Mikey Snooze opens late-night Latitude on Thursday with his outrageous 1980s aerobics dance party, followed by -The Line Of Best Fit – the UK’s biggest independent new music website – who present Pop Never Dies on Friday.  On Saturday BBC Radio 1 an MTV presenter and  Jack Saunder brings festival attendees a taste of his fabled Hopscotch Club Night with a showcase of new artists and new music and closing In the Woods on Sunday is East Anglia’s biggest and best 90s Britpop, indie and dance night Common People.

Across the arts stages, cinch presents Latitude continues to electrify after dark. The UK’s best club nights take centre stage as Latitude’s comedy stage is transformed each night till the early hours.  Massaoke returns with the world’s biggest mass sing-along party, featuring a live band – Rockstar Weekend – who’ll be playing hairbrush anthems from across the decades for you to sing your heart out to. Throw your hands in the air like you just don’t care and let POP music course through your veins into the night with Guilty Pleasures, or dance to ABBA, only ABBA, and all things ABBA at  Gimme! Gimme! Gimme! ABBA After Midnight. Club de Fromage, who will be bringing with it a cast of zany characters, huge sing-alongs, audience interaction, massive pop, rock, indie, disco, and dance anthems from across the decades, and non-stop dancing! Everybody Loves Lizzo will be celebrating life, love and dancing; and all to a killer soundtrack with everything from Dua Lipa to Dolly Parton to Destiny’s Child (and loads of Lizzo of course!)

Latitude’s beloved Shack will be returning to keep party-goers dancing till the early hours amongst the Faraway Forest with their audio-visual bass-thumping extravaganza. Still up for more? Disco Shed are back, bringing with them a troupe of their best DJ’s to keep your feet stomping all night long with their massive beats.

This stellar line-up is joining the late night shows already announced. See cabaret at its finest from The Cocoa Butter Club, who’ll start the festival weekend off by serving a spirited soiree celebrating performers of colour, featuring burlesque, live music, drag, voguing, hula hooping and much much more. Get ready to dance and be dazzled at The Big Gay Ball – a four hour rampage of glitter, drag and pop bangers with Xnthony and his troupe of fabulous kings and queens.

Let’s get this party started.