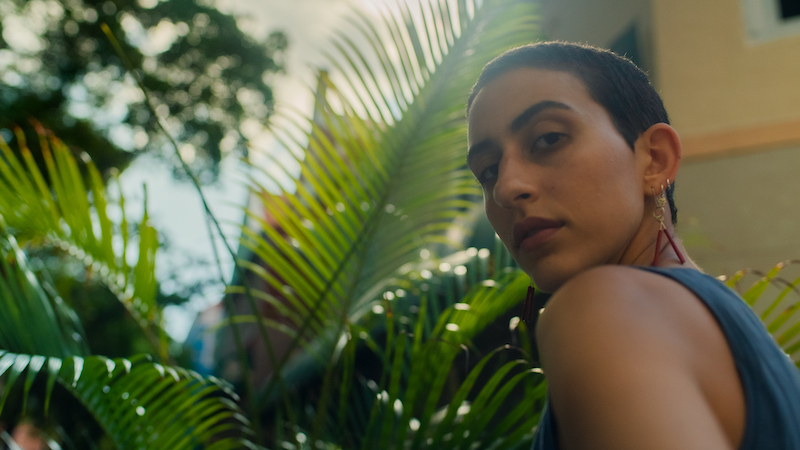 Following the release of her recent single “Pity Party“, New-Jersey born, London based Muna Ileiwat is now sharing the title-track from her upcoming debut EP ‘Twenty-Seven‘, which is out August 19th via Fear of Missing Out Records alongside a video directed and filmed by Guy Gotto.

Speaking about the track, Muna said “The title track of the EP, ‘Twenty-Seven’ is a coming of age song. It explores the transformative and existential emotions of adulthood that started to surface and become prevalent for me at the age of 27. Released alongside a music video shot at my grandmother’s house in Curaçao”

On the video, Muna added “My grandma’s house in Curaçao is probably one of my favourite places in the world. There’s so much history in that house; it’s where my mom grew up, where my parents’ families first met and where my brothers and I have many of our own fond childhood memories. Every room tells a story of my family history. The house brings me so much peace and being a part of the visuals for a song that explores so many existential feelings kinda felt like clarity. Guy did an amazing job at capturing the space and all its sentimental value.”

Crafting an artifact for those pivotal moments in our lives comes naturally for songwriter Muna Ileiwat. By embracing those sacred, shifting currents, the London-based, US-born songwriter carves a new pathway into the ground we thought our feet would never leave. New EP Twenty-Seven follows the fluctuating grief of lost friendships, the anger of sudden change and the overwhelming sight of a new horizon but Muna isn’t deterred by a hairpin bend––instead, it brought her back to herself, and eventually to her greatest and deepest joy: creating for the sake of it.

Hit with a sudden break-up at the start of the pandemic, Muna shunned social media and instead turned to more organic methods of catharsis. “I was trying to not be too precious about my songwriting or my art in general. It’s hindered me in a lot of ways in the past –– writer’s block that eventually turns into existential creative anxiety,” she says. Creating a project solely for herself, with no intention of releasing it or getting too attached to the end product saw Ileiwat’s creativity flourish. And with this open bloom, came new collaborators and a new community.

Recorded at Zig Zag studios in Woolwich, London, Twenty-Seven‘s sonic world sees Ileiwat stretch her creative muscles to create an intricate, saturnine setting that embraces gloomy keys, sauntering bass guitar – played by Abi Sinclair – and crisp, lingering percussion, played by James Luxton (Fenne Lily). However, this isn’t an EP that wallows in its melancholy––instead, it offers a measured and sometimes cheeky refrain, as Ileiwat declares “There is ambition, and there is defeat or a whiny bitch underneath,” on the EP’s stripped-down, lilting title track. The song’s combination of bright, finger-plucked guitar and fitful electronic percussion mimics the bumpy ride that comes with exploring and honouring the transformative emotions of early adulthood, but it also reaches for clarity among the fog of uncertainty. Here, Muna faces her demons head on with humour, wit and grace.

Twenty-Seven recognises the anguish and anxiety of finding your way in a world that offers no road map. By exploring and addressing these existential feelings, Muna ultimately offers a sense of purpose and inner-tranquility. Twenty-Seven is the joy in missing out, and the hunger for something better. “My main inspiration throughout this process was exercising and accepting a lack of control. Creatively, writing and recording this EP felt new in many ways. It felt like I reclaimed my innovation by just creating for myself,” she says. “It’s a profound way to experience a sense of community and being able to share that with others is wonderful in many ways. It made me realise that’s the real reason I wanted to make art in the first place.”