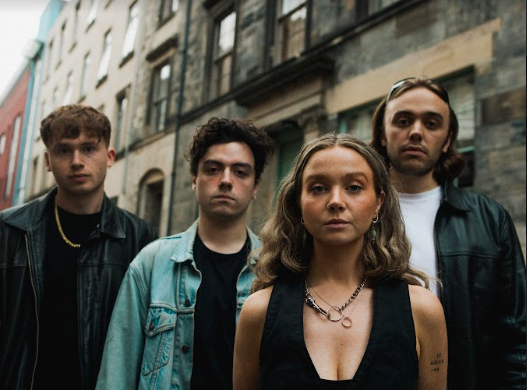 Scotlands Dead Pony have released new single “War Boys” taken from their debut EP of the same name, due out on 23rd September 2022 via LAB Records.

“Imagine you’re being chased through a barren wasteland on a motorbike. A leather laden fugitive who is trying to escape Immortan Joe and willing to take a detour through the gates of Valhalla. This anthem is for you.

Like Bullet Farm, we wrote War Boys after we watched the new Mad Max movie. We loved the imagery of the War Boys from the movie and their whole aesthetic so tried to portray this through the lyrical content. Every line of the song is a reference to the movie and the gritty riff and punk vocals are there to amplify the War Boys rebellious nature. We wanted to try and capture the madness of that cinematic world and put it into a song.” says the band

The Band depart from Glasgow’s fertile punk/post-punk movement with a grunge infused sound akin to Wolf Alice, Queens Of The Stoneage and Bikini Kill.  Dead Pony’s sonic aggression is matched only by a no-nonsense attitude and infectious battle ready choruses which has seen them captivate crowds this summer at Glastonbury, The Great Escape, TRNSMT and supporting Twin Atlantic.

Dead Pony have written, recorded, produced and mixed their debut EP themselves back home in Glasgow.  The only way to capture the true spirit of what this band is.

“It was a huge challenge for us as previously we’ve only recorded one track at a time.  But stepping up has made us much more confident as a unit and hungry to do it again.  We’re already thinking ahead to our debut album now!! ” says the band.

“Musically we have fully embraced our rock side – huge riffs, big choruses with a sprinkling of punk and grunge elements. We couldn’t be more proud of how well the singles has been received and can’t wait to get the rest of the tracks out into the world.”

War Boys EP tracklisting:
Bullet Farm
Zero
I Don’t Need Alot
All Dressed Up For Nothing
War Boys
23, Never Me

“Zero” and “Bullet Farm” are out now on LAB Records